One of the first trips that we took when we moved here way back in 2008 was taking a day trip to Gibraltar.

The Rock. It just pops up out of nowhere. It's HUGE!

At that time we weren’t that comfortable driving around yet (I think we had been here for a month) but our local Information, Tickets & Travel (ITT) office offered tours.

The tour was by bus with a pit stop/coffee stop halfway there.  While it was nice to not have to worry about driving, we realized just what an easy trip  this was and have since done it two more times.  It only takes about an hour and a half from Rota (if that).

The most important thing is that you MUST bring your PASSPORT!!! I know SO many people who have gotten to the border and thought that government ID was okay. Passports are a necessity!

The best way to get onto the rock is by parking on the Spain side of the border in the town of La Linea.  There is a McDonald’s right across the street with a large parking garage underneath. Parking is cheap and it is a 5 minute walk to the border.  U.S. passport holders get waved through (at least we were, maybe we are just very non-threatening looking).

Don’t hop on a tour right away, grab one of the local buses and take it downtown.  It runs a Euro or two per person (cheaper for kids), buy a round trip ticket it’ll save time later.  The bus will take you downtown and drop you off in front of the Casemate Gate.

Once you walk through the gate you will arrive on Casemate Square.  The square has a great selection of restaurants (including some chain ones like BK and Pizza Hut if you are just fiending for a taste of America).

When my mom came this past September we wandered around the square before deciding on one with a tasty looking menu. 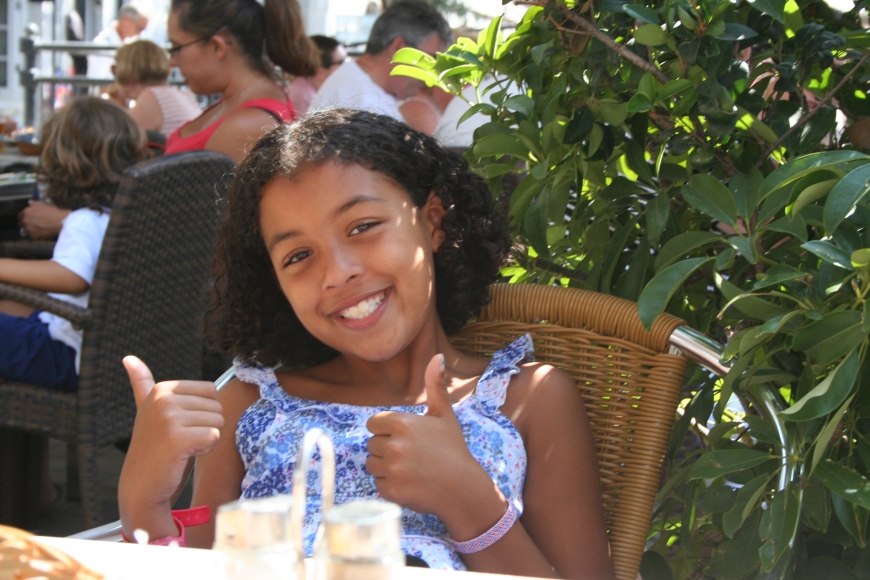 Waiting for some lunch...

O was just in a mood and nothing could make him happy.  I think he finally came around with some Fanta Naranja and fries stolen from our plates. 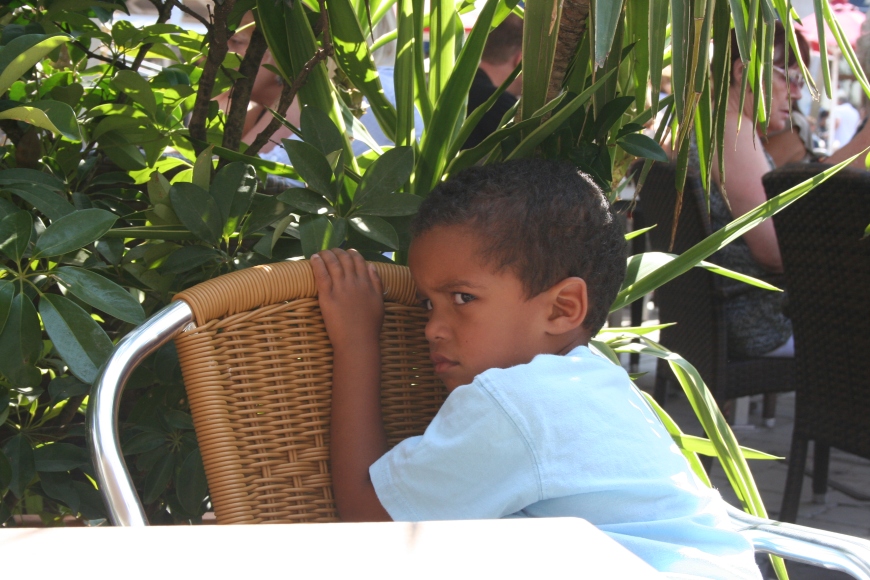 Not hungry, just hot and cranky. And don't even THINK about looking at him. 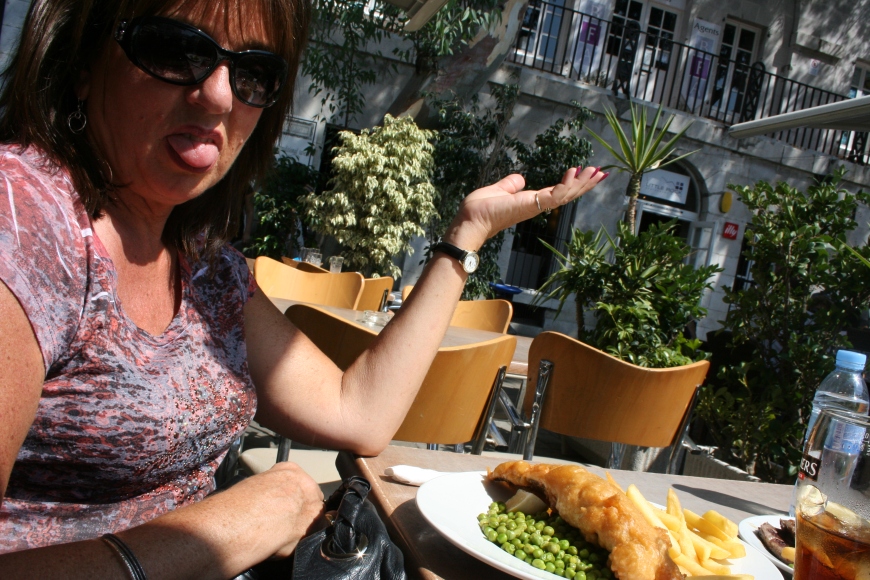 So my mom ordered fish and chips since we were somewhere English.  She was not expecting them to bring her a entire half of a fish.  What is really funny (besides her disgusted look) was that the fish turned out to be excellent and she was SO happy she had ordered it.

Also in Casemate Square is Gibraltar Crystal.  My mother-in-law was contemplating a return visit to Spain just to be able to go back and shop at this store.  They have a demonstration area set up so you can watch them blow glass, always fascinating.  You can get find some nice pieces to take home for £10-15. Of course some of the one of a kind pieces are several hundred pounds.

As far as currency goes, in Gibraltar both pounds and euro are accepted.  I recommend just using euro because if you do happen to pull out Gibraltar pounds from and ATM or exchange money to get some and you don’t use them all you aren’t going to be able to use them anywhere else.  Gibraltar pounds have the same exchange rate as traditional pounds but can’t be used anywhere else in the world.  Stick with euro!

Right off of the main square there is a promenade that takes you through the center of downtown and along lots more shops and cafes.  Plenty of photo opportunities with phone booths, 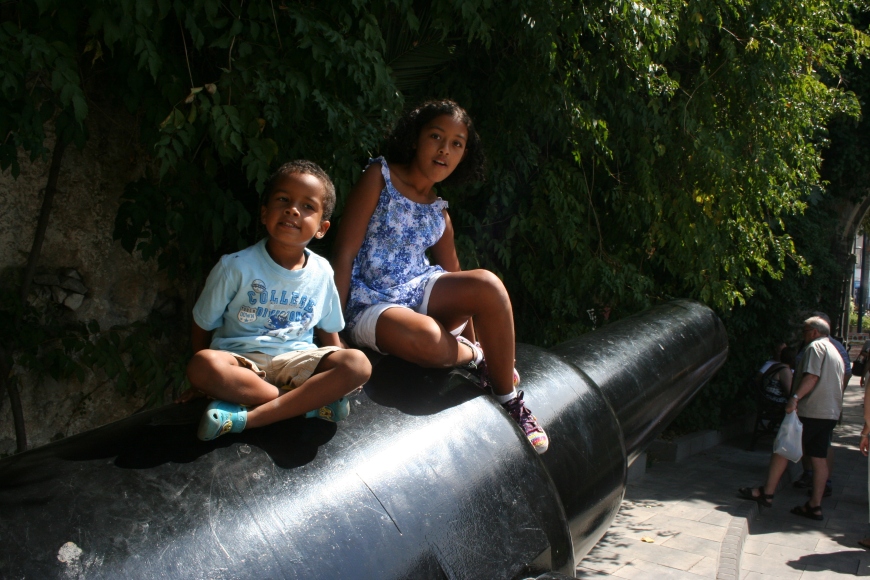 the man himself, Lord Nelson,

Gibraltar has SO much history, it can be difficult to take in during the course of one visit.  It has been occupied by so many different groups and has been the center of so many different conflicts.  Because of this there are quite a few memorials as well as a cemetery to walk through.

One of the beautiful gardens along the walk.

Once you’ve done enough walking and/or eating it’s time to hop on one of the rock tours.  While there is a gondola that takes you up to the top (it is cheaper than the van tours) I recommend shelling out the money.  The van tours only cost 20 euro per person and if you have  a child that can sit on your lap you don’t have to pay for them.  There are a few different itineraries but pretty much all of them hit St. Michael’s Caverns and the Siege Tunnels.  Not every tour will hit the Pillar of Hercules, Europa Point or top of the rock.  The drivers are full of information and every one we have ever had has been quite the character.

Pillar of Hercules with Grandma Carol 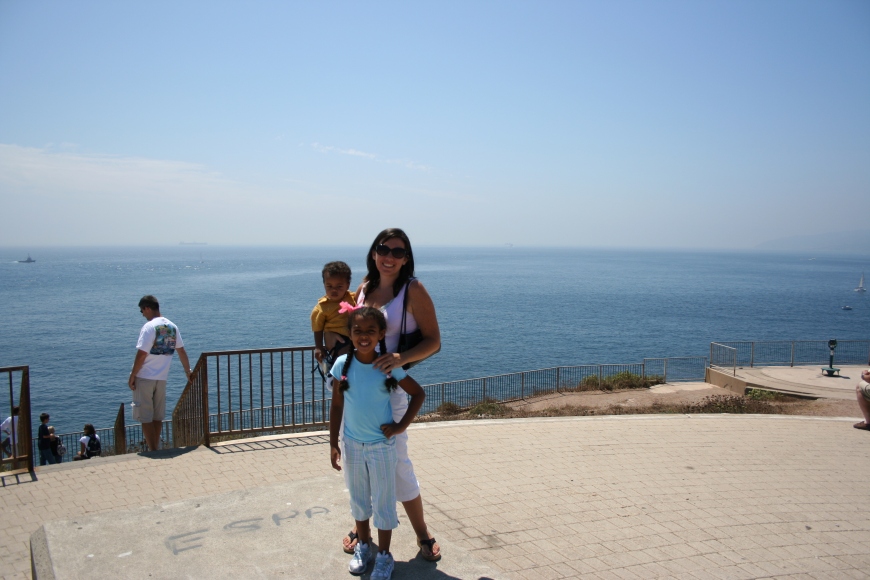 Europa Point - Morocco is over there somewhere (Also 2008 photo)

The Gibraltar apes are world famous.  It is said that as long as there are apes in Gibraltar the British will hold onto the rock (even if replenishment from some of their African cousins is necessary as was necessary during WWII).  The apes are Barbary macaques and are very bold.  They love to steal from unsuspecting tourists.  We have seen them dig into purses and backpacks, jump into people’s cars to steal food and grab any plastic bag in sight.

One of the great things about having a driver is the fact that they come with treats to get the monkeys up close and personal for photo ops.  This was our very first driver, Charlie. He was awesome. A crusty old Gibraltarian he had no problems sharing with the monkeys:

Charlie feeding monkeys peanuts from his mouth.M in 2009. I need to steal the photos from my mom's camera for some from 2011.

The second time we went back our driver was actually Charlie’s son-in-law. Small rock!

During the hot summer months the stop at St. Michael’s Caverns is much appreciated.  These natural caverns were used as a hospital during WWII, and are currently used as a performance hall.  There are lots of super cool rock formations, although taking pictures in the dark is a pain in the butt. 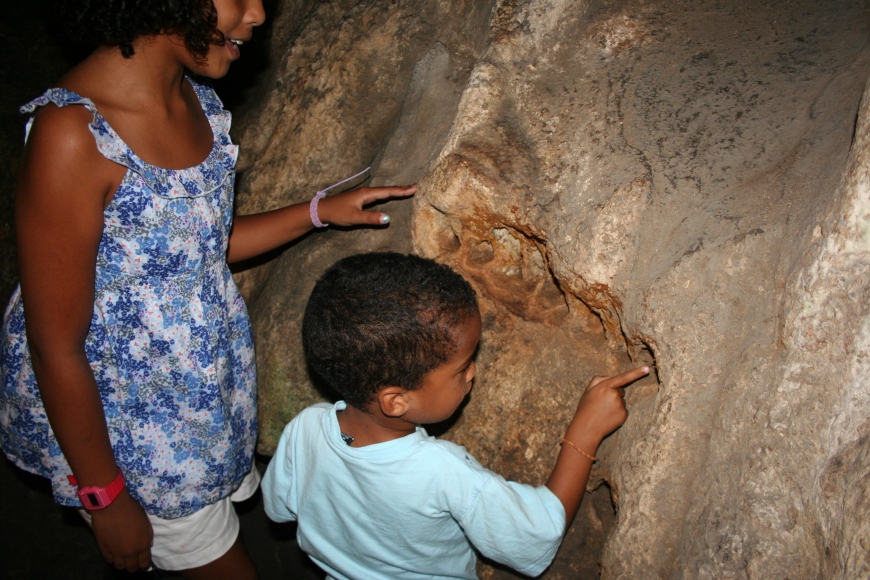 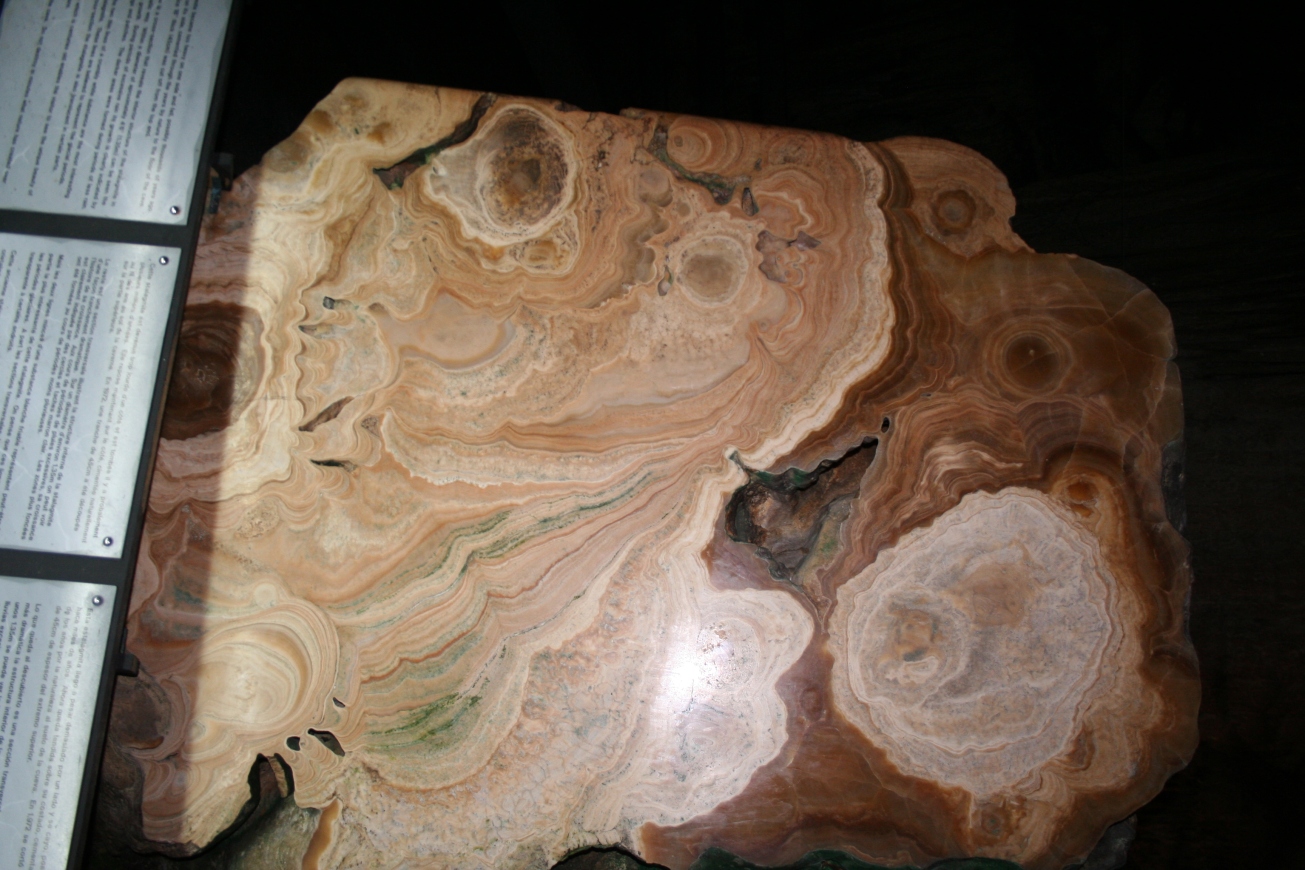 While walking all along these attractions you will see these iron rings sticking out from the rock.  These were used before the road was present (oh my God. What a road it is, if you think coastline driving in California is bad, this will scare you silly. There are turns where the van has to stop and make a three point turn, just to drive down the switchback! Also for the drivers to get licensed to do tours on the rock they have to drive the entire thing backwards! Yikes!) Anyways, these rings were used to hoist things like cannons and supplies from the base of the rock up to the top courtesy of some donkey power. I love old metal. I seriously took 20 pictures of these rings.

The Siege Tunnels are built into the side of the rock and have ventilation points that conveniently double as cannon ports. 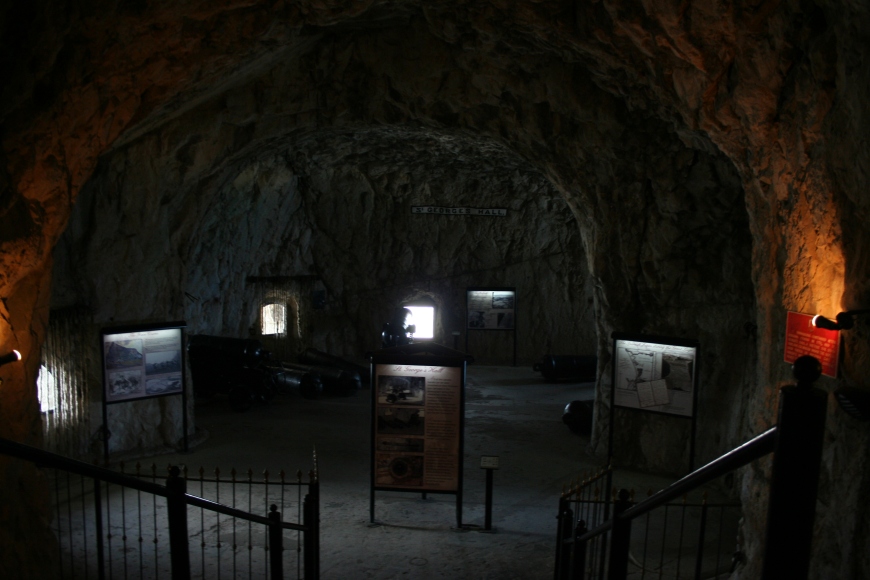 The view from the tunnels. That is the Gibraltar airport and also the only road onto the rock. The main road crosses the runway and in the event of a take-off or landing the road is closed and the runway is swept for debris.

Clouds rolling over the rock, it was crazy seeing this from the top!

Gibraltar is a great day trip and one of our favorite places to take visitors to our little corner of Europe! Got a question, let me know!