Today we combined our regular fun spring break activities with an FRG event. I invited the FRG to come join us for a pottery painting day at Hickam. I was VERY upset to learn that budget cuts may soon be affecting our favorite cheap place to paint! The kids had fun painting and hanging out with friends. We had a pretty good turnout of FRG ladies which was great, and I painted a replacement mug for my last one that has developed a hairline crack!

After expressing ourselves artistically some of us headed over to Wright Bros. for a delicious lunch by the water… Grilled veggie panini for me, yum! The fish were out and about and we saw DOZENS of yellow tangs. Why have we never seen these fish snorkeling??? 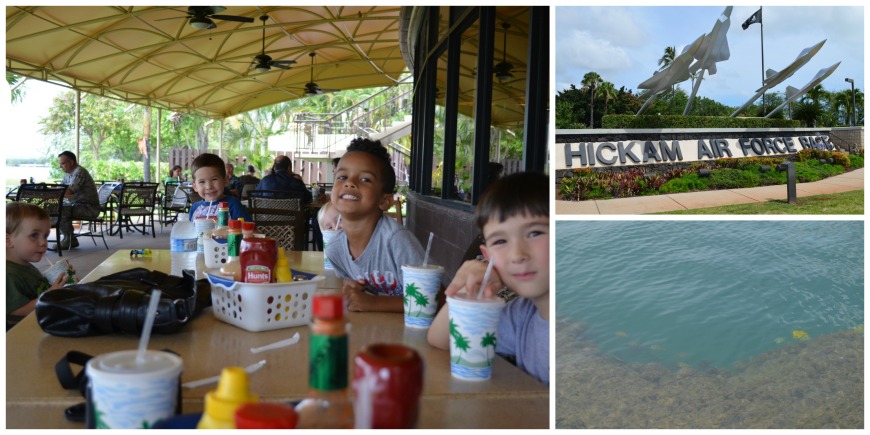 Cutie kids and cutie moms… Seriously, I have met some really great ladies this deployment! 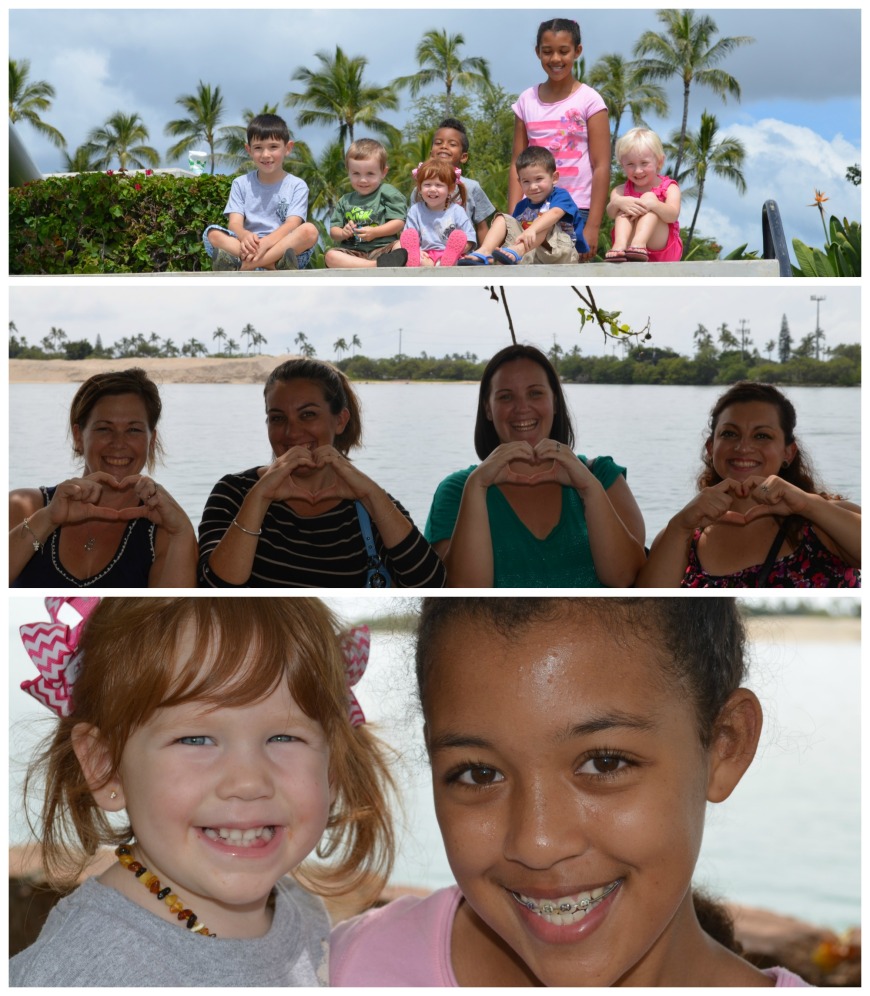 And Mckenna is ready for a baby sister… Sorry to disappoint! Not happening!

So this weekend we finally had our halfway party… For those not familiar with the Navy, this is a party that the FRG (Family Readiness Group) throws to celebrate the halfway point in a deployment. Basically keep your spirits up. Thankfully I have an absolutely awesome FRG board and we threw an incredible party for all of our spouses. 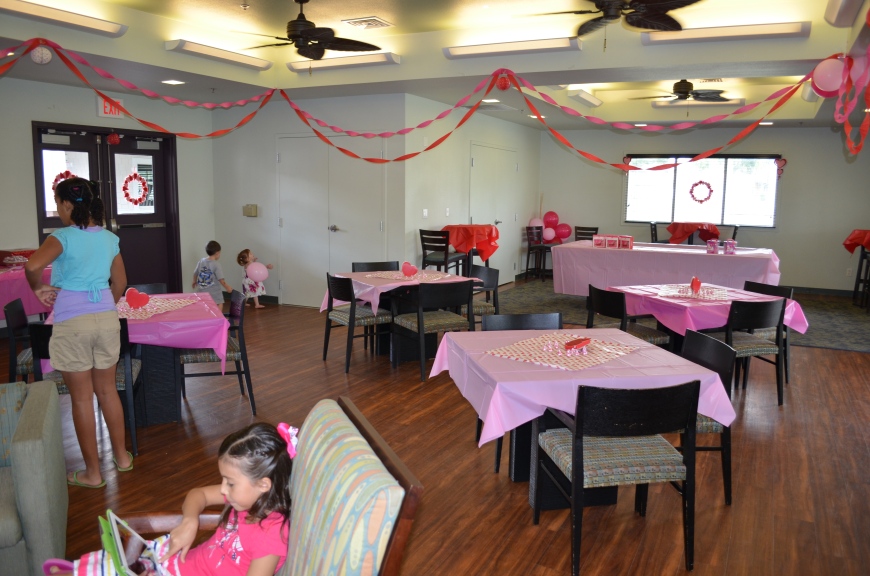 I just need to give a huge shout out to Target for their clearance Valentine’s items. This decor ended up costing about $40 for everything! 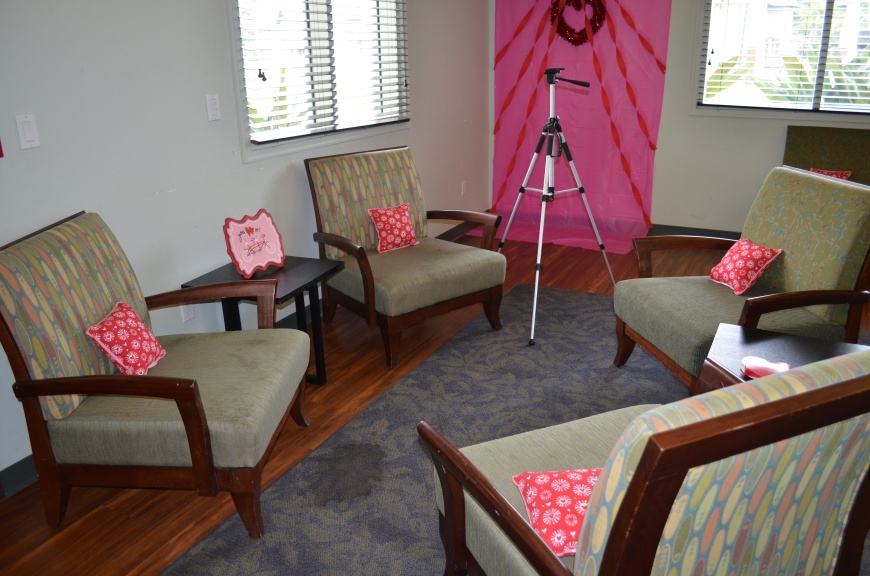 We also had a little backdrop set up in the corner where we were recording video messages to send to the ship! Some of them got a little emotional and I was tearing up a little! 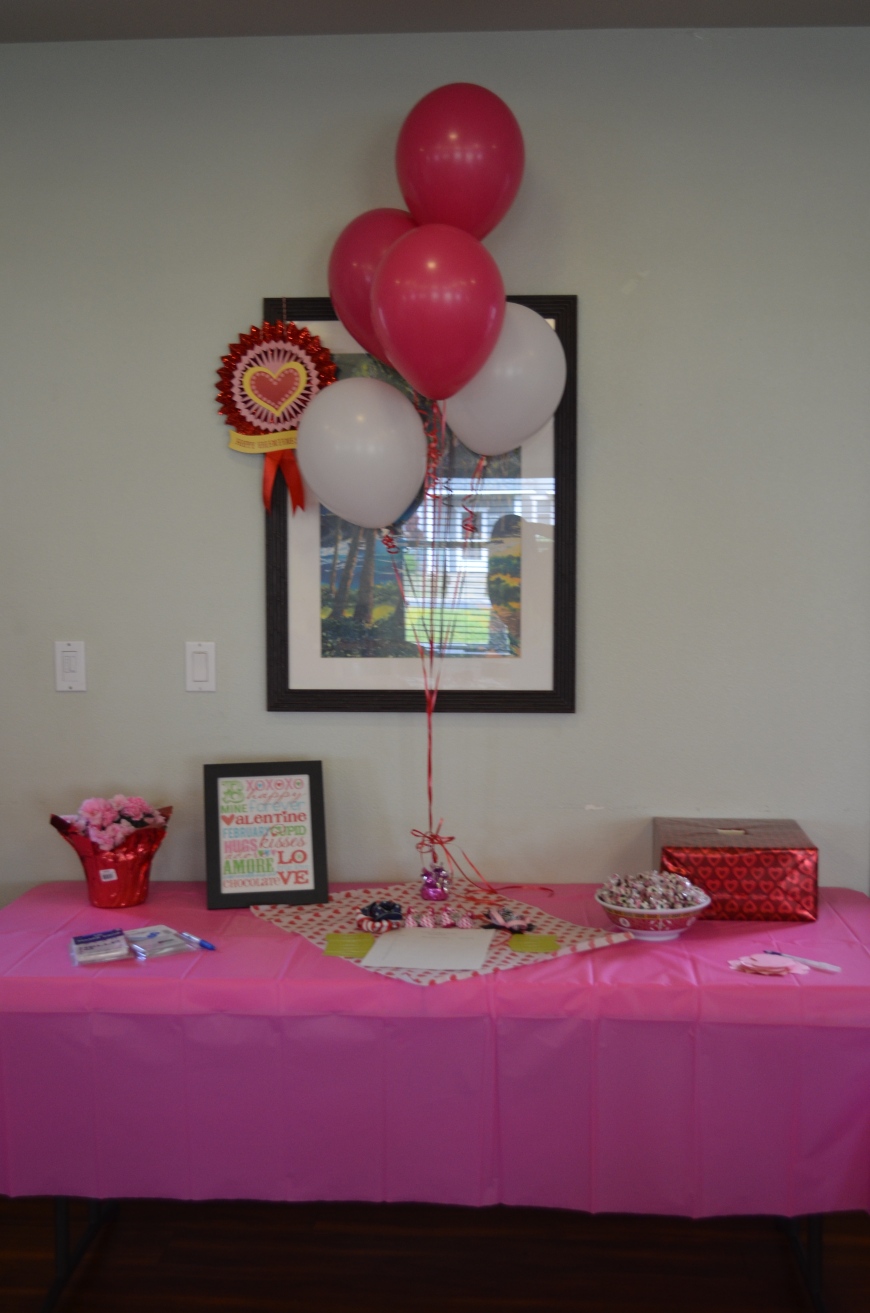 I was a little worried that we were not going to have enough food because the RSVP’s had been pouring in and this was going to be potluck style. 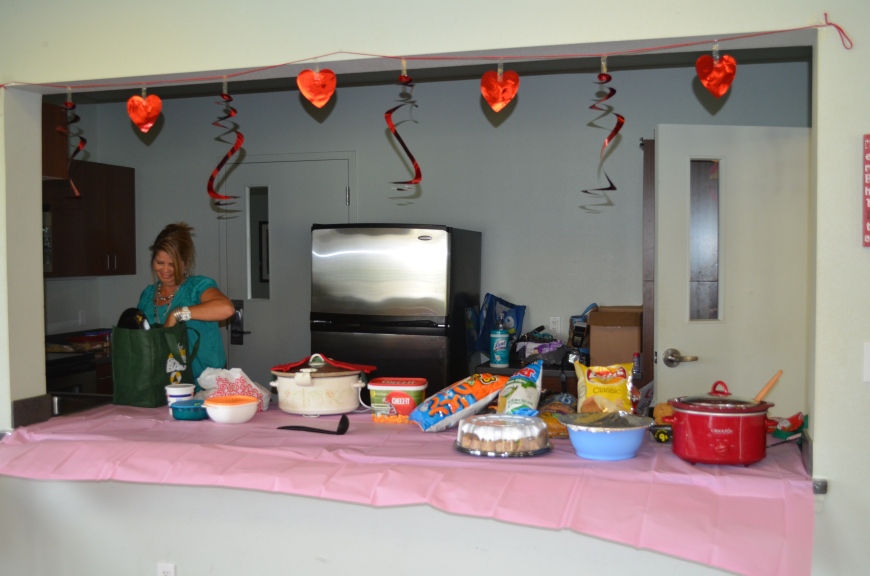 Well I did NOT need to worry! We had SO much food! Not an inch to spare on the counter!

Thank you to all of the wonderful families on our ship…. Seriously, if you are new to a sea command, find your FRG! Not all of them are full of drama and catty women!

And my board is full of wonderful women… Taking on this position was SO outside my comfort zone, but I have made such wonderful friends in the process. I couldn’t have asked for a better team! 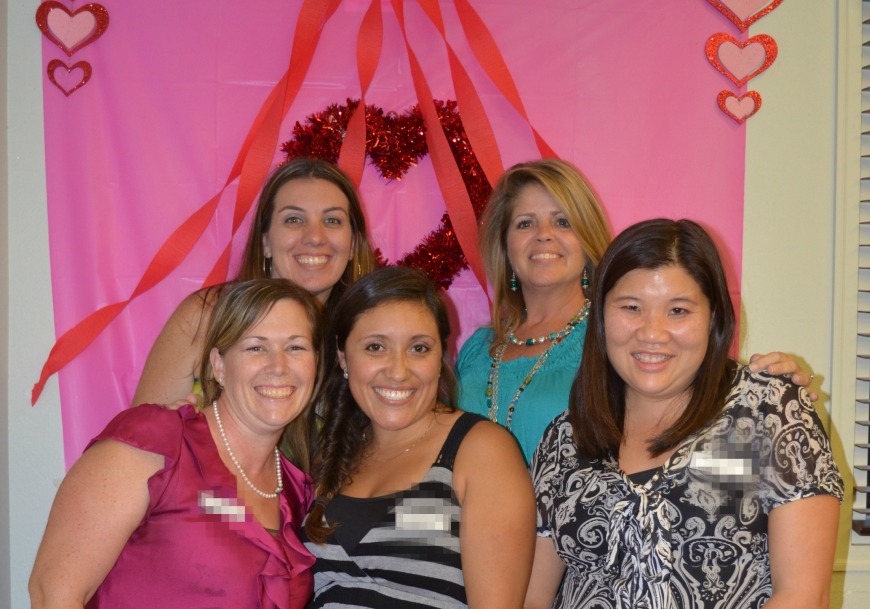 Today I had a busy day of Family Readiness Group training. It was a really informative day, I learned a ton of information and I had a great time with my board members. I am REALLY excited to actually start with all of the activities and fundraisers we have planned. We are going to have an awesome FRG and hopefully have a great turnout from spouses!

So in my rush to get out the door this morning I left my keys inside. Our door has a lock that turns from the inside even if it’s locked, and as I was shutting the door I was looking inside my purse for my keys so I could turn the deadbolt. No keys. Mckenna had run to get the mail the day before so I am solidly blaming the entire mess on her. Well I knew there was no point in doing anything then so I waited until we were on the way home to call, what was supposed to be a 30 minute wait for maintenance turned into an hour and a half and probably would have been longer had one of the resident service office employees taken pity on me after repeated calls, so she went and grabbed the keys herself. I need to take her cookies or something.

Well that ruined my afternoon and made me grumpy and cold and it was raining outside so I decided to skip football practice. I know, horrible of me, but come on! It was raining, what are my kids supposed to do? Just sit in the car for an hour and a half? Miserable. So I am a team flake. Terrible. I’ll try and do some conditioning on my own time to make up for it!

Lesson learned, one I haven’t had to learn in DECADES. Keys in hand BEFORE you close the front door. (And if you take the keys out of mom’s purse, put them back!)

Tomorrow we are planning to go see Rise of the Guardians and I am DETERMINED to get my last few things purchased AND mailed off tomorrow. I am so very close!

We have officially hit four months of living in Hawaii.

And I am in love with this state.

Hawaii can be a difficult place to live. It is so very different than living on the mainland. It can be hard to not have every store and restaurant you are used to having around the corner. (No Olive Garden, Michael’s or Chik-fil-a!) Living here means that you are living far from family, at least a 5 hour plane ride away. It can be expensive, housing is expensive, food is expensive, we are on an island so you will pay more for everything. We are lucky to be able to shop at the commissary and exchange which offer a huge savings over shopping on the local economy.

But with all that it is still magical to live here. I will be driving and then all of a sudden see a gorgeous rainbow, a vibrant green volcanic range, or a stunning sunset over the beach.

We did come here with a bit of an advantage. After living in Spain for four years we learned to live without many of the American conveniences that people complain about not having here. Plus we’ve been living far from family. So when we moved from Rota to Pearl Harbor it was awesome for us! We had Target and Starbucks and T-mobile…

It is like most places for me, it depends on what you make of it. If you spend your time here complaining about how much you hate it, you’ll end up hating it.

We’ve had a great time getting out and exploring the island, learning about the culture and customs and eating!

Don’t get me wrong it’s far from perfect here, the DMV is a nightmare, the traffic is the worst, and the bugs are out of control. There are shady parts of the island, it sucks being 6 hours behind all my friends and family on the east coast (especially when your husband deploys!)

I have found some fun friends by stepping outside my comfort zone and playing football, volunteering with the PTA and getting together a FRG for the Paul Hamilton.

The only thing that would make it better would be if my husband were still here to explore the island with me!

We actually had a busy weekend. Shocker. Normally we have zero plans but this weekend we were running around a bit.

Saturday started WAY too early, Omar had soccer pictures at 8:15. That is just wrong. So we had to get up really early to get over to the spot they were taking photos.

This is me taking a photo in blatent disregard of the no camera signs. But it’s not like I was trying to take any posed pictures, I just wanted to show the BEAUTIFUL location right on the water. Damn I love living here!

After pictures we had some time to kill before his game so we ran over to the exchange and I grabbed a coffee and some supplies for a deployment craft. (will post as soon as it’s done)

The hulks had another awesome game and won again! (Doesn’t it totally look like Omar is about to do a header? That would have been cool!)

After his game, we ran home and showered him so we could meet up with some of the spouses from our ship. It was very different from what I was expecting since my last experience was with an aircraft carrier with thousands of sailors and now it is a destroyer with a couple hundred. On the carrier the officer’s and enlisted spouses didn’t even meet together which I thought was so weird. Whatever. Anyways, so I guess I thought this was a big spouse meet and greet. Nope. It was our two ombudsman and  6 wives. As of right now we don’t have a Family Readiness Group or FRG but we are trying to get one started. So we are the ‘get it started’ group. Not that I mind, I do love to volunteer and everyone was really nice and enthusiastic.

Our ‘spouse support’ group. We did have a nice lunch. (And I recommend the Italian Chicken Panini at Wright Brothers Cafe!)

Mckenna holding one of my neighbor’s twins at our meeting. Seriously folks. This is where I live.

After lunch we ran to a friends house for a bbq. We are on the football team together and I was feeling really bad because we were running about an hour late because my other meeting ran long. Wouldn’t you know it? We were the first people there? Rude! I can’t stand people who don’t show up for parties! And no one else showed up for almost another hour! I felt terrible for her! Eventually everyone showed up and the kids had fun playing. She has a son Omar’s age and Mckenna got to play with ANOTHER set of twin boys!

I swear I feed this boy! 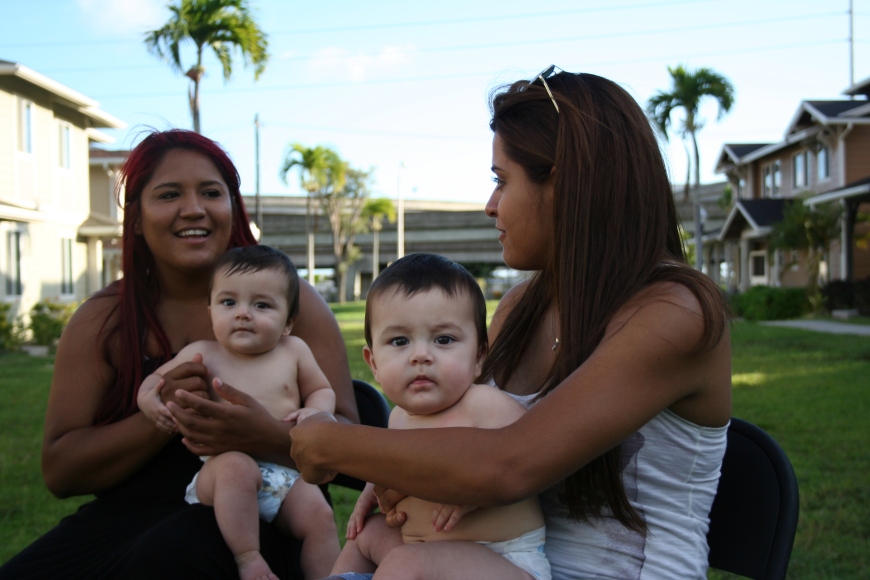 Look at these gorgeous ladies! What good looking football players! We ended up having a good time, I met another wife from the ship, the kids had fun running around and I didn’t have to make dinner. Win-win!

Sunday we ended up having a lazy morning. Mckenna was driving me nuts so I called another football friend and asked if her daughter could come play. Thankfully they live really close so it worked out perfect! The girls had a great time playing with American Girl dolls.

They wanted me to take this picture to submit to American Girl magazine. They are so cute!

Finally it was time to get ready for my football game. I was kind of dreading it because we had lost the last two and I was kind of demoralized. I play center so I am the one who snaps the ball. If I have a bad snap it’s a dead ball and we lose yards. Its VERY stressful! Anyways, we ended up playing Army and we won! It was SUCH a fun game. We were laughing and having fun and kicking the crap outta them. I did end up getting hit pretty hard, I was chasing after the running back and some broad came outta nowhere and plowed into me. I was SO pissed, I came up swearing. Its FLAG football, not tackle! My team had to rein me in a bit so I didn’t get into trouble and the other team ended up getting a personal foul and losing 15 yards. Meanwhile I have a lovely scraped upper thigh as a trophy.

We also had team pictures taken. I am happy we were all wearing our pretty new jerseys on Sunday! 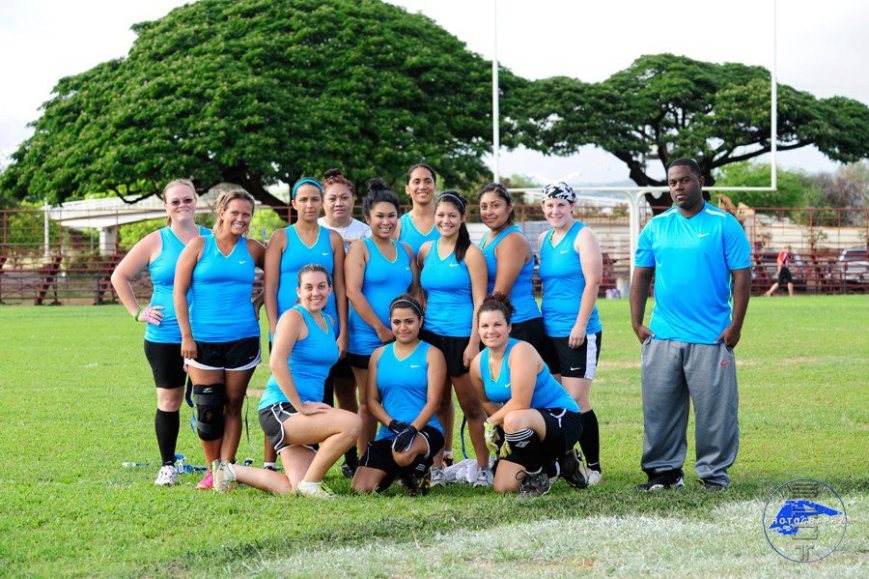