So for my husband’s birthday in November I got smart and gave him a couple of gifts that I could partake in as well: A scuba dive and an ATV ride. First up, scuba with Island Divers. We were really … END_OF_DOCUMENT_TOKEN_TO_BE_REPLACED

Let me tell you, having a kid old enough to just set loose at the beach is one of the most awesome things ever! I am still patting myself on the back for the beach party idea. A bunch of … END_OF_DOCUMENT_TOKEN_TO_BE_REPLACED

Look who had a birthday! 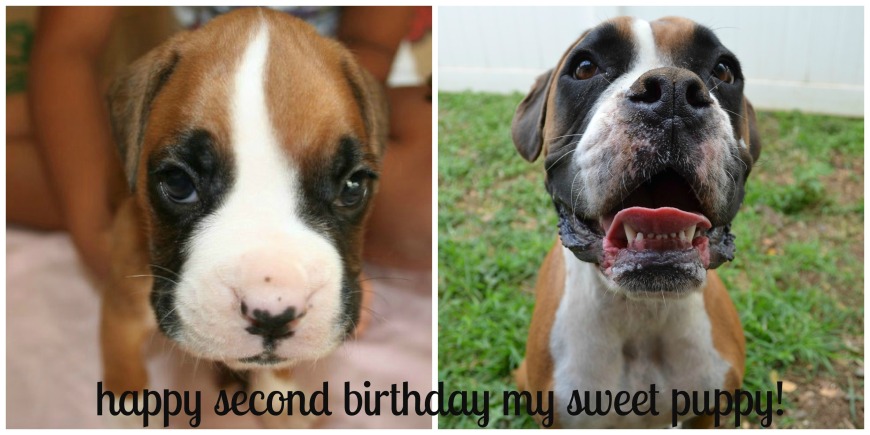 And yes I really did want to throw him a birthday party but resisted! Instead he got some special cookies from the Petco cookie bar, a trip to the dog park and a trip to the store to pick out a couple of new toys. (he is eating the chipmunk as we speak!)

I love this dog, yes, he drives me crazy, but he is my buddy!

Also I love that he is my guard dog during deployment, thank goodness he learned being protective from somewhere because he was NOT like this in Spain!

I don’t get it. I really don’t. And thankfully she has a mimi who indulges in her every desire.

Cue the best birthday presents EVER…

(realize I didn’t get a picture of the knee high mustache-sporting bacon socks. Will update!) 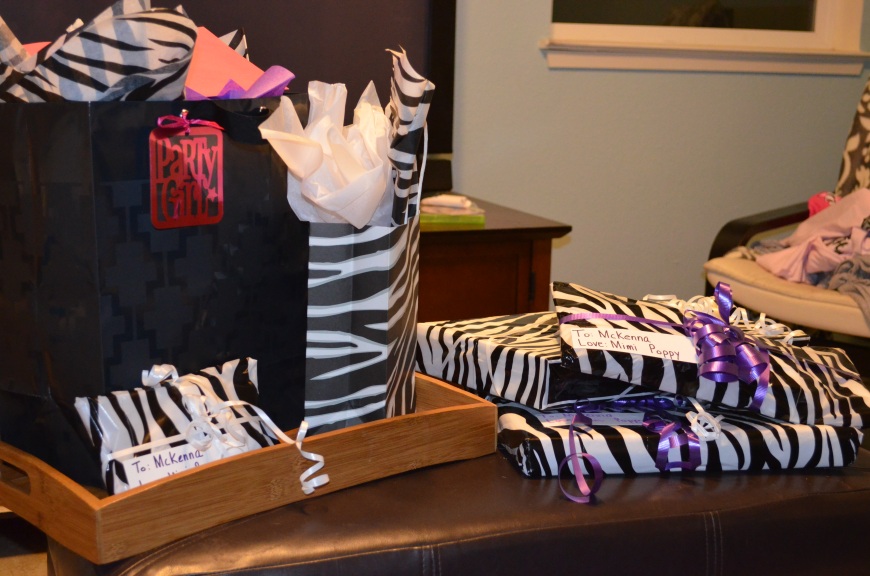 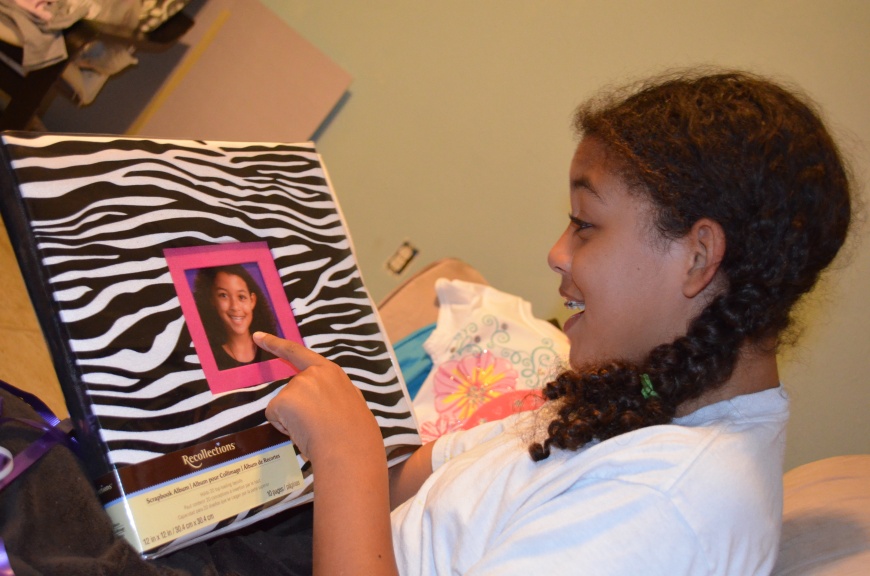 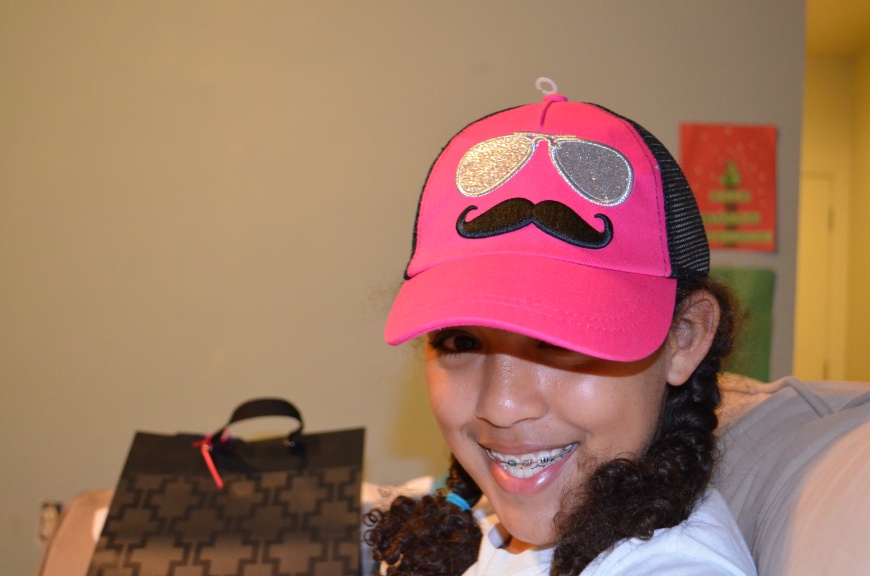 Well I have finally recovered from Mckenna’s epic sleepover this weekend. Really though we had a great bunch of girls over, thank goodness my daughter makes great friends!

Decorated down to the very last minute but had fun with all of the zebra and purple. I could have spend another $200 at Party City on decorations but we were good with this… I also had a bunch of balloons out front tied to my shepard’s hook that someone stole! Mckenna was so mad because there was a zebra mylar one in there. Who does that?! 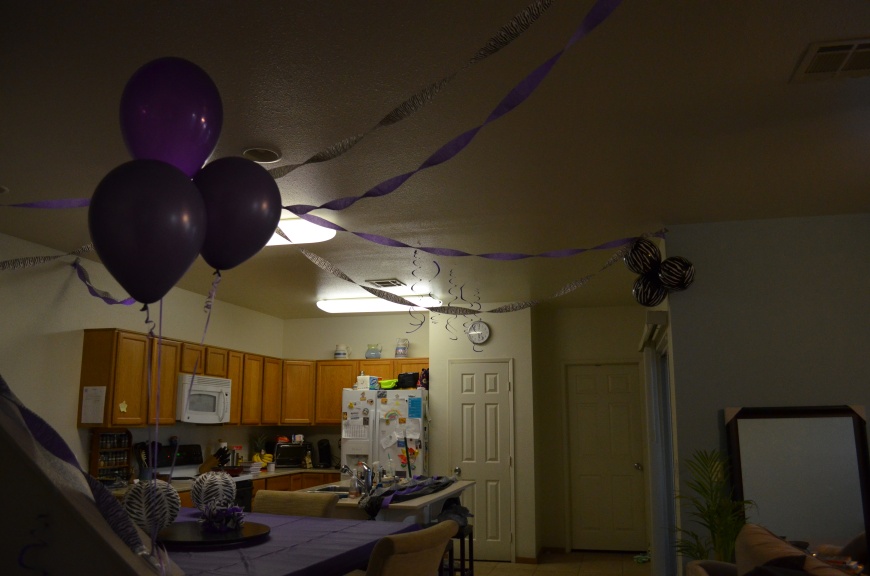 The girls even brought some beautiful coordinating gifts! I was kinda irritated because a lot of the Party City stuff was zebra and pink instead of the requested zebra and PURPLE. But we made it work. 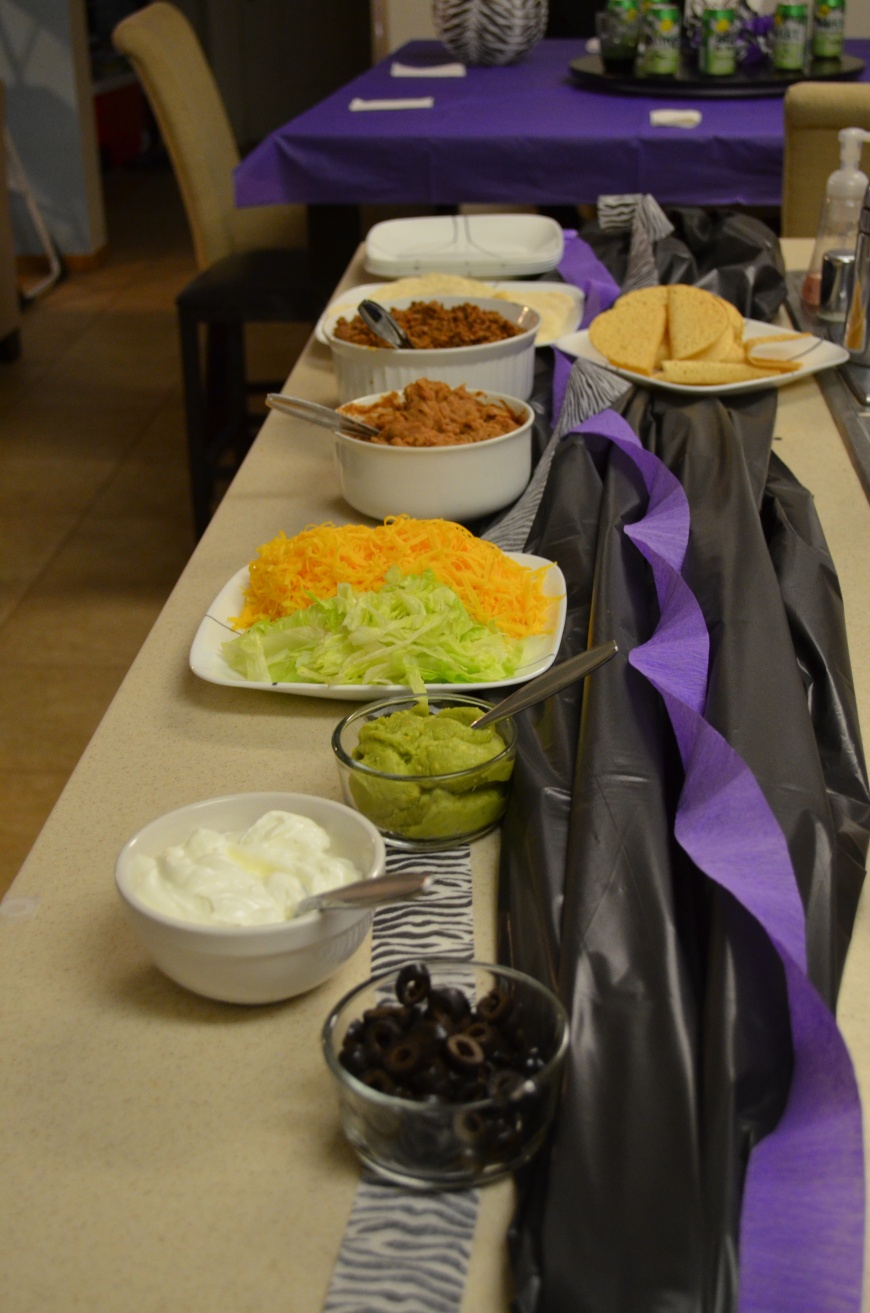 Dinner was a taco bar. Easy peasy. And lots of leftovers for taco salad for me. 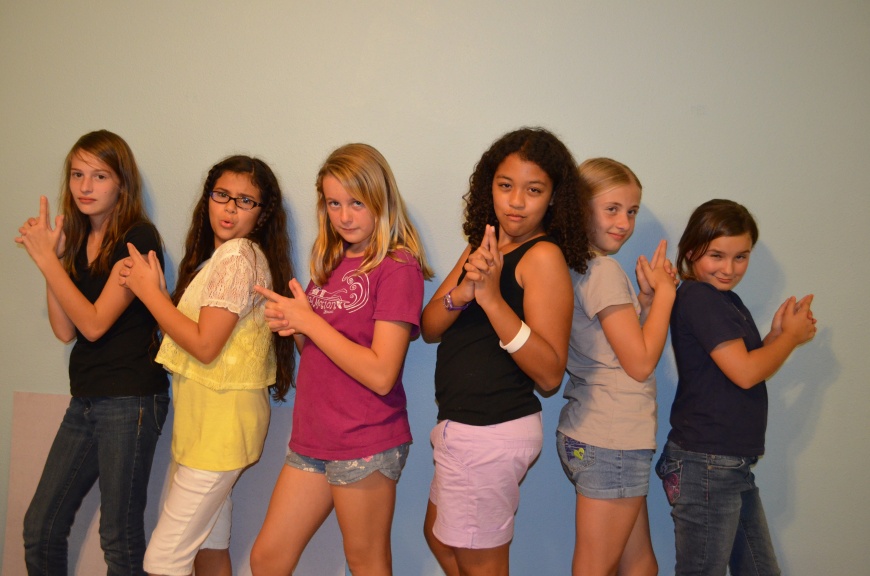 Mckenna and her friends doing the ‘Charlie’s Angels’ pose. Are they not the cutest girls you have ever seen?!?!

The cake turned out great, the frosting was weird. I added candy food coloring instead of regular food coloring and it got super runny. Still tasted good but I was not a happy camper and had no time to fix it.

The zebra inside was awesome and I’ll post a tutorial on how to do it because it’s super easy and the next time I do it, it will be even better. 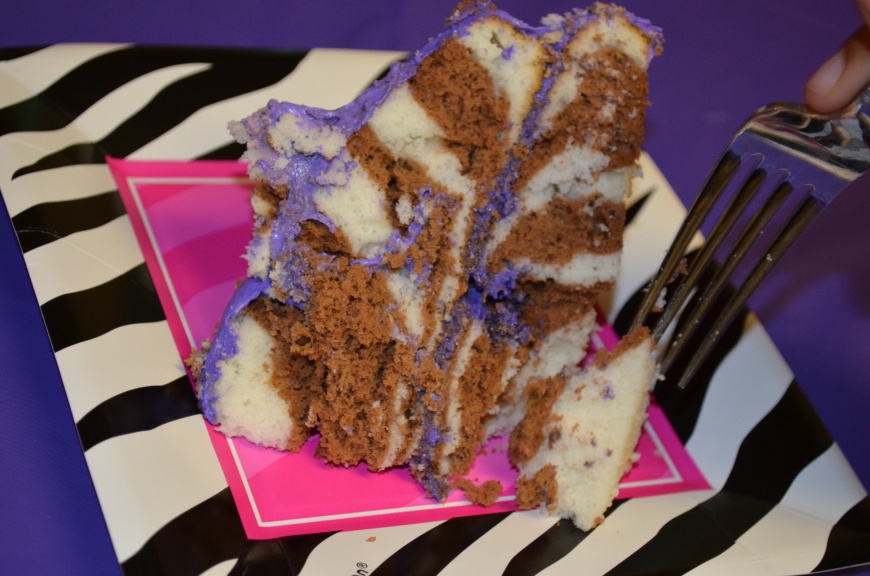 Also? Games were played. I did the old “Put a bunch of random objects on a tray then cover them up and try to write down how many you remember” game, chubby bunny which NO one had heard of. Sorry Mckenna but this picture makes me giggle every time I see it! 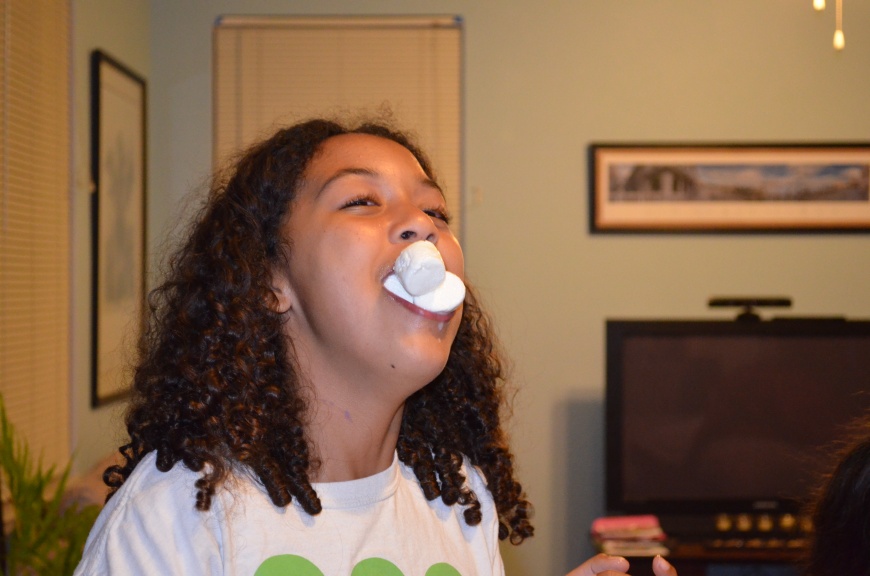 Then we stole a game from a recent baby shower we had been too… Looks simple, is actually REALLY hard! Try to scoop cotton balls and balance as many on your head as you can. (Ahem, I did in fact WIN this game at said baby shower…)

Mckenna had a GREAT party, the girls all had fun. What more could you ask for?!

The best birthday (ever!) started off with an owl delivering her Hogwart’s Acceptance letter… All those familiar with the Harry Potter series know that you get your letter on your eleventh birthday. I had so much fun making this, let me know if you are interested in a template!

Also another bonus, having your birthday fall on National Pancake Day… Letter M pancakes on the menu! (While sporting your brand new birthday outfit! New tradition, one present in the morning containing a new outfit for school that day!) 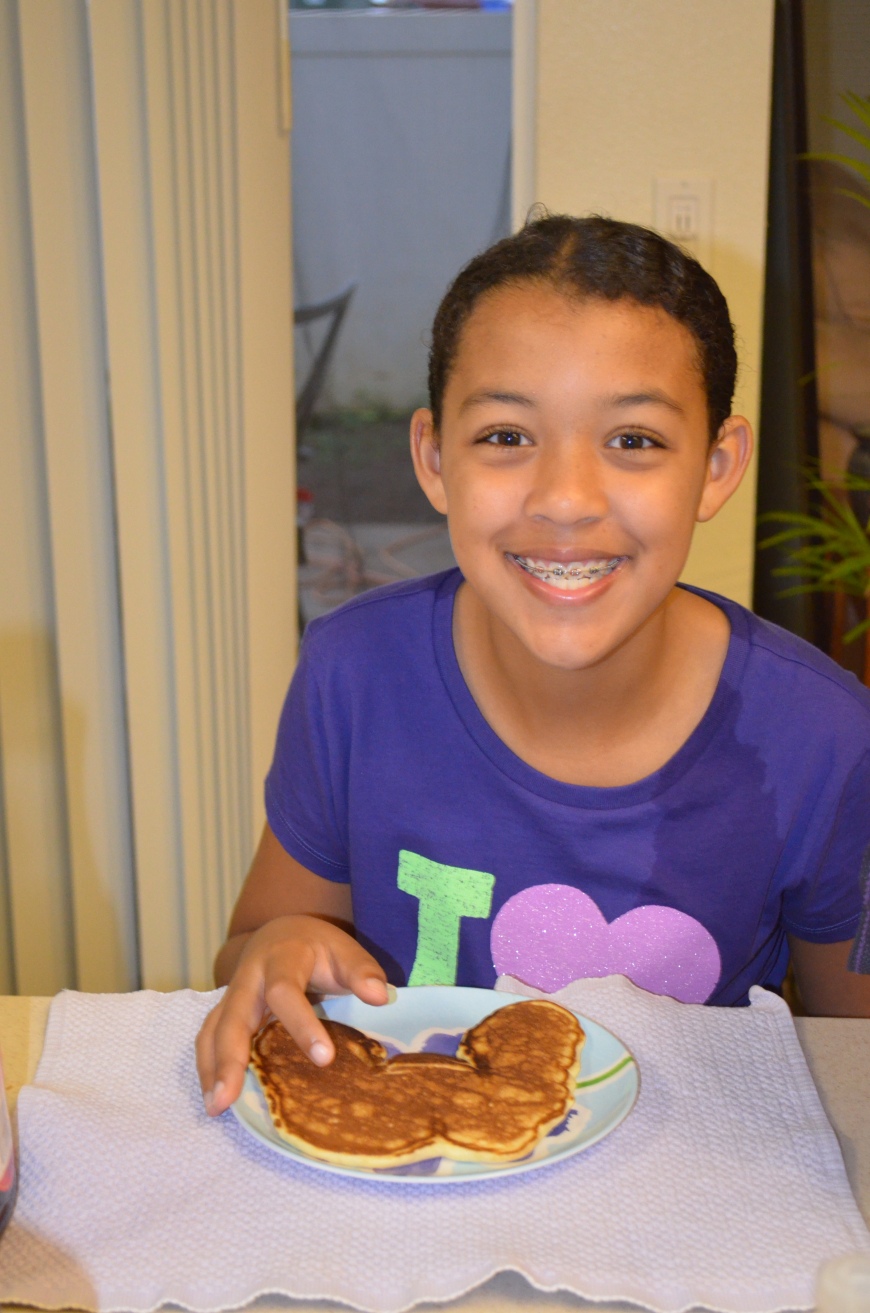 And a special delivery at school of cake pops for her class (purple ones of course!) and a bouquet of balloons (more purple! Are you seeing a theme?)

The afternoon was spent at soccer practice (more cake pops!) and then Papa John’s for dinner… Those are the birthday meal requests I love! She got to open some really fun gifts from us and family members. The highlight was the PS Vita, it was such an awesome gift it even made her hug her brother! 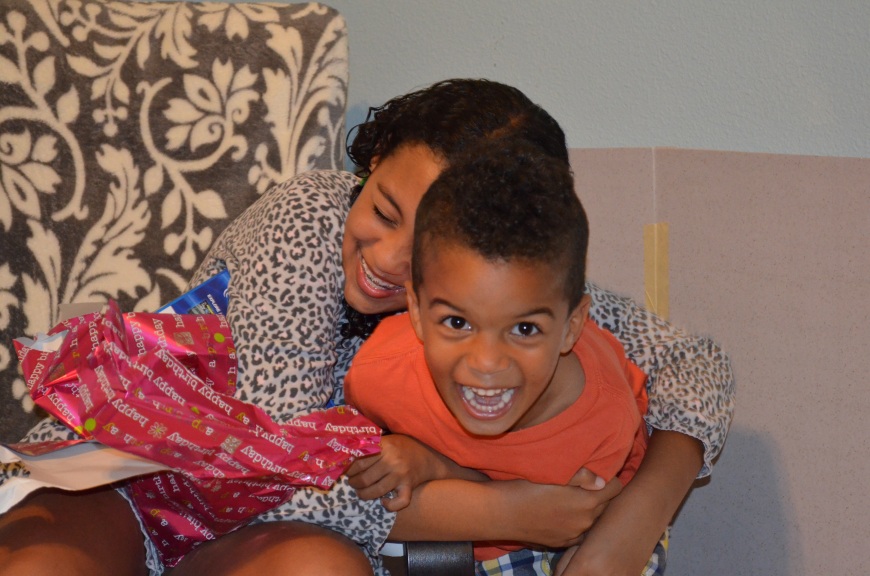 Glad you had a wonderful birthday sweetie! You deserve it!