So we had no plans this New Year’s Eve. We just wanted to hang out at home, no parties, no big deal.

It was actually not too bad. I made bbq pork sandwiches, corn on the cob and we had pecan pie for dessert. Quite the southern meal for a New Year’s in Hawaii!

At around 11pm Mckenna reminded me to do our yearly interview. I’ve done this for the past few years, asked the kids some questions about the past year, about themselves and what they would like to happen in the new year. Its a cute way to document the new year with the kids.

Finally at 11:30 I said you know what? Let’s drive up to Camp Smith and watch the fireworks from there. There had been fireworks going off for the past SIX hours, it was very exciting. Hawaiians love them some fireworks! We aren’t allowed to set them off in Navy housing, not that that was stopping people but I wasn’t trying to get into trouble!

So we grab some blankets, the dog and hop into the car.

Camp Smith is a small Marine base up on top of a hill with an absolutely stunning panorama from Waikiki to Ewa Beach. You can see the entire southern half of the island. I’ve played football up there and we always get a beautiful sunset to watch during practice. We got really lucky because we got to watch about 6 sets of fireworks going off at the same time. I don’t even know where they were all coming from, Waikiki, Ala Moana, Ewa, Pearl Harbor, I really am not sure. But it made for a great show.

We also had the added bonus of all of the neighborhoods around the base and the base itself setting off fireworks. It was awesome. Especially since there is a pretty steep hill right in front of the kids with houses down there, and they were sending up fireworks that would go off right at our eye level.

I am pretty mad that I forgot to take my camera’s tripod so I couldn’t get any good flash off/long exposure fireworks pictures. Guess I’ll have to try it around the corner in July!

On New Year’s Eve I had wanted to go out to dinner in Jerez de la Frontera, a bigger city about 15 minutes away.  There is a restaurant there (near Ikea!) called Wok that does a kind of Mongolian buffet. We have a smaller version in Rota but I had heard good things about this one, bigger, nicer decor, better buffet selection.

Well we get out there at around 7:30pm which is early but we figured if we could kill time if we needed to wait until 8. Wok is closed. Dark, no one inside. Okay maaaaaybe we are a little early. So we hit up the grocery store Alcampo next door to look for sparkling apple/grape juice.  No sparkling non-alcoholic beverages were found (although I did see Lambrusco for sale, I’ll have to go back and pick some up!) we did get some delicious donuts for dessert/breakfast/who knows they just looked yummy.

After killing time in the grocery store back to peek at Wok, nope still dark and not a soul in sight.  Let’s just hop over to the mall that is right next door and find something in the food court. Park in the strangely half empty parking lot to walk up into the mall and see only people walking out. What the heck? Its almost 8pm on a Saturday night, usually the mall is packed with people! Mall doors locked. Oh no. This isn’t a good sign. Back over to the Ikea/Wok shopping center, McDonald’s maybe? Closed in the five minutes it took to run to the mall and back.

Now at this point we could have just given up and gone home except for the fact that I have been slacking on grocery shopping and there was nothing to eat at home (okay maybe pb & j but that was our last resort). So back to the base we go, we’ll hit up Pizza Villa even though we had pizza the night before. I figure a chicken, bacon, ranch sandwich will save the night. Pizza Villa closed.  While I am ready to cry and give up because I am cranky, hungry and frustrated that we are all dressed up with literally no where to eat, my husband perseveres.

Out into Rota, where surprise, surprise: Wok Rota is open! And of course we were only the second table in there (after other Americans). I really think everyone in Spain was already making their way toward a plaza to party.

So food! We finally got to eat! 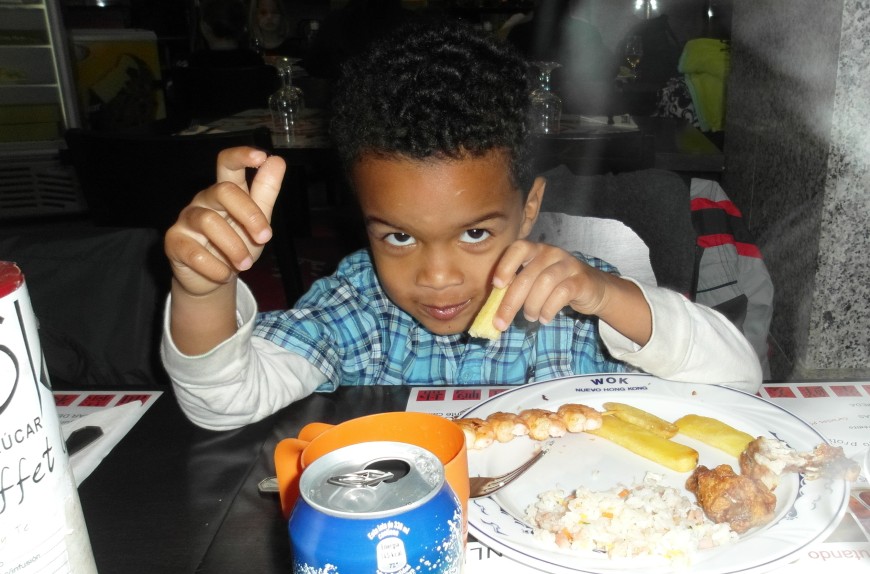 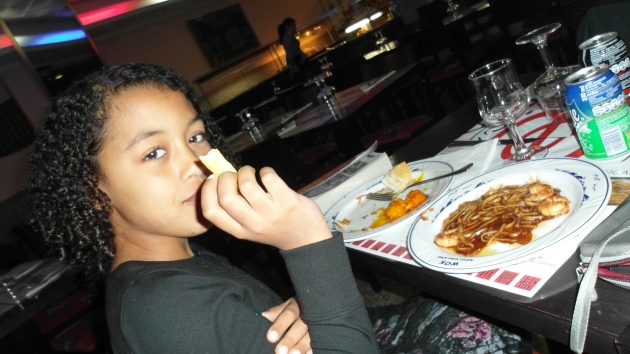 I'm not embarrassed to admit that all THREE of those plates are mine. I was starving when I filled them. 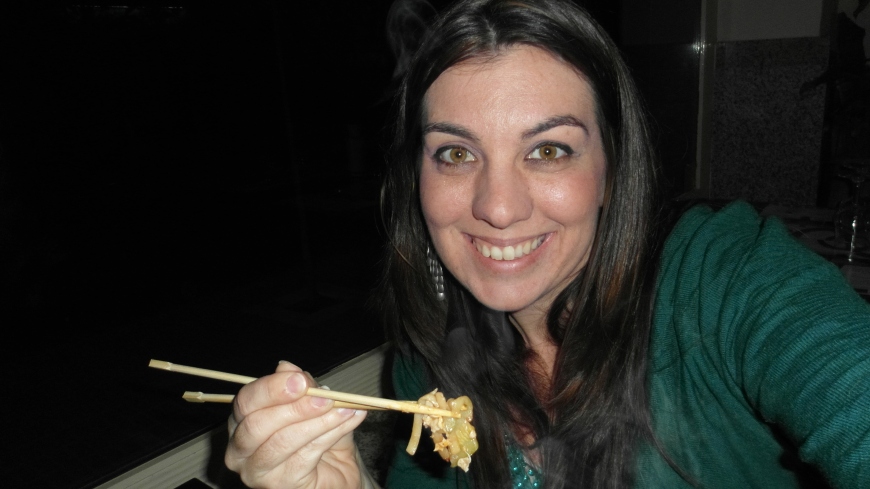 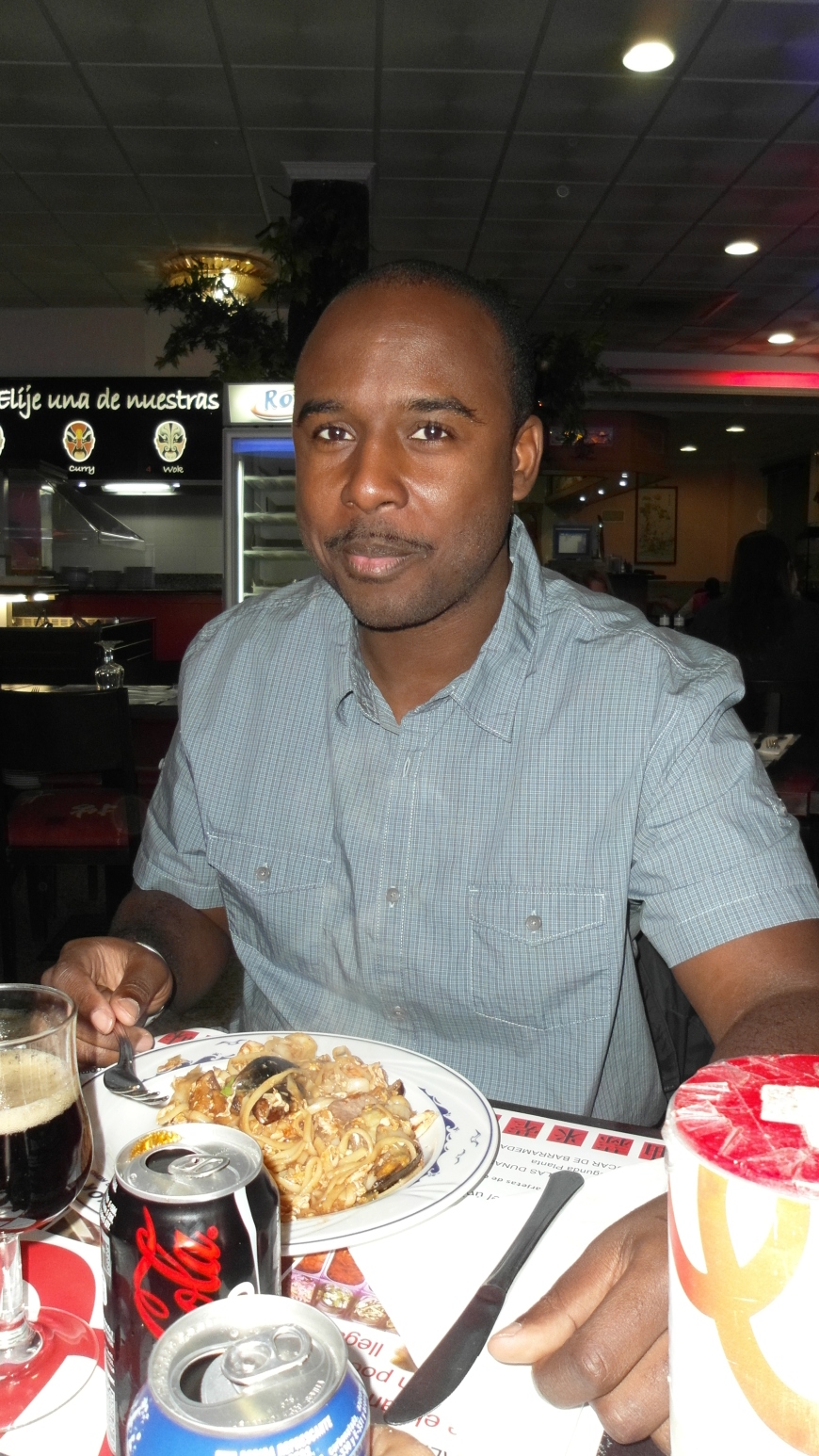 Not shown, his plate of squid and frog legs.

Every country has its own traditions and Spain has some pretty fun ones.

New Year’s Eve is no exception and this is one of the Spanish traditions that you can do in your own home!

If you are in Spain on New Year’s Eve you will find pretty much everyone in a square or plaza hanging out with friends and eating and drinking.  When the clock strikes 12 everyone eats 12 grapes (ideally one for every strike!) and you will have luck all year long.  The grapes here are crazy big and generally have seeds, but you’ll see cans of grapes (conveniently 12 grapes!) for sale that are smaller and easier to eat.

This started one year (many many years ago) with a bigger than normal grape harvest.  The farmers couldn’t get rid of their grapes so they  basically started the tradition! A great way to get rid of the grapes and the start of a fun tradition.

We are generally boring and stay home with the kids because its a bit insane to be out with the kids (although it’s pretty normal to see kids running around that late anyways) but we like to have our grapes at home anyway.  Thankfully I can get some smaller grapes from the commissary so we can actually eat them!