The Christmas madness has officially started.

Friday night we had our tree lighting ceremony on base.  It’s gotten MUCH better from our first year here, when it consisted of lights hung up in a tree shape in front of our PSD building.  We now have a real (fake) tree with lights, decorations and giant fake presents….  The girl scouts were handing out cookies and the boy scouts were giving out hot chocolate.  The high school band was there along with the cheerleaders and dance teams.

Santa flew in on a helicopter.

That is always a showstopper.

At four years old my son really gets it this year and has gone from being PAINFULLY shy around strangers to actually talking when people talk to him! Yay! So I was AMAZED when he said he wanted to go say ‘hi’ to Santa by the firetruck.  We ended up not getting to talk to him but he did wave and smile.  We had a mini meltdown when the boy scouts ran out of candy canes but good thing the Commissary is 10 feet away! $1 later and all is well again and we had plenty extra to give out to some friends who also missed out on them.

I would post pictures but they were all taken with my phone and are craptastic.  I may update with some stolen FB photos later…

Sunday was breakfast with Santa at the galley.  We were expecting a crazy amount of people so got there about 15 minutes early…. aaaaand there was no one there yet. So we goofed around playing on this AWESOME tree outside that I always make M climb. 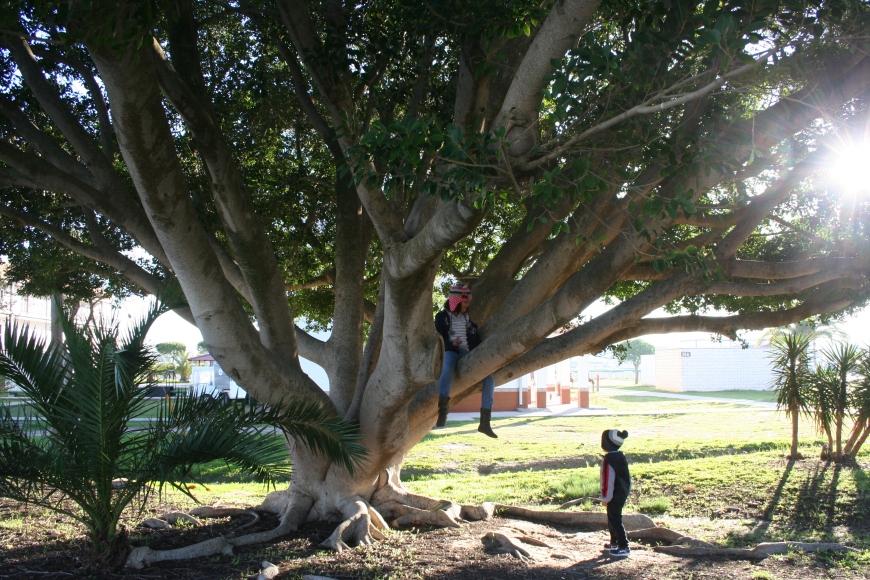 When finally we went inside to get some breakfast.  It was a nice treat, we pretty much never go there to eat but its not bad. Less than $5 for each person, eggs made to order and some additional breakfast stuff to choose from. I was pretty happy with my tortilla con todo which is just an omelette with the works.  While they were trying to sucker me into letting them hit the soft serve ice cream at 10:30 in the morning we decided to do a quick photo with Santa while there was no line.

Then home to finally pull out all of the Christmas stuff. I did it and it was as horrible and time consuming as I thought it was going to be.  The kids had fun helping me put up the decorations, I had a classic Christmas song station playing over the iPod. (Which drove my kids crazy. They were like Bing who?) Everything is cleaned up, empty totes put away and now have the apple cinnamon candles burning and the lights shining. Now I really need to get my butt online and get to ordering some gifts!
Merry Christmas!
~Reb